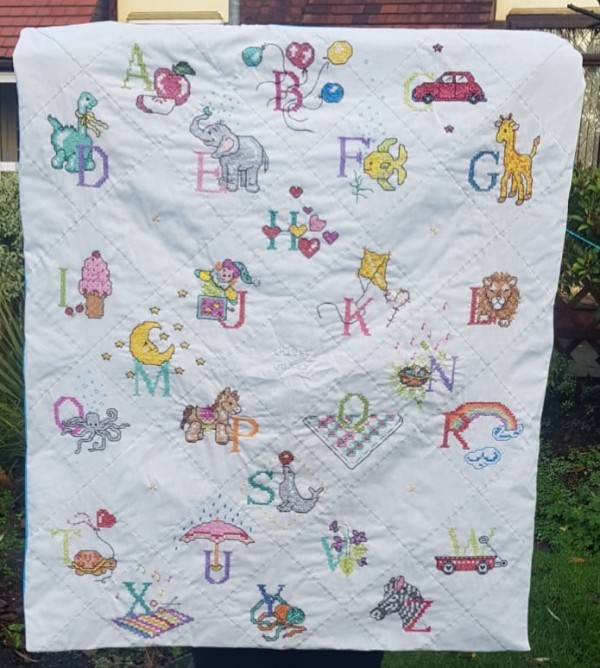 What I am sharing today is the definition of a labour of love. I don’t usually hand-embroider much, possibly because that quick satisfaction of the whir of my sewing machine cannot really be beaten but when I inherited my Nana’s embroidery threads in February, I decided I wanted to use them on something meaningful.

To do this, I decided to make a quilt for my nephew. I bought an alphabet quilt topper template and began with enthusiasm… then life took over, I worked lots, we moved house, went on holiday and the quilt remained 4 letters in for about 3 months. I picked it up again in September and I pretty much worked on it until about 3 days before my gorgeous nephew’s birthday! I wish I could say, “oh, this… this was easy”. But that would be a LIE! It was a long process but I knew that Ollie and his Mummy and Daddy would absolutely love it and this kept me going. It wasn’t all bad, of course, I sat in front of the TV mostly and worked away at it and the fact that they are individual letters meant I felt like I was doing it step by step, rather than one big picture.

The colours of the threads are so bright and pretty and the images are childlike and just perfect for the occasion. I added his name to the middle and then backed it with an iron-on wadding. The quilting lines between were then added by hand too. I was tempted to do this by machine but the pattern is designed to overlap the lines sometimes so I sewed this by hand too.

I then backed it in a lovely bright blue by sewing them right sides together, trimming it, turning out and then hand sewing the hole shut. I then ironed on my little “made by Autnie Emma” label, which my niece designed on the Dutch Label Shop.

It was so well received and totally worth it, my sister absolutely loved it and I know it will be an heirloom forever, which will carry a little bit of my Nana with it.

Until I get another bright idea like this, I will definitely be sticking to machine sewing! 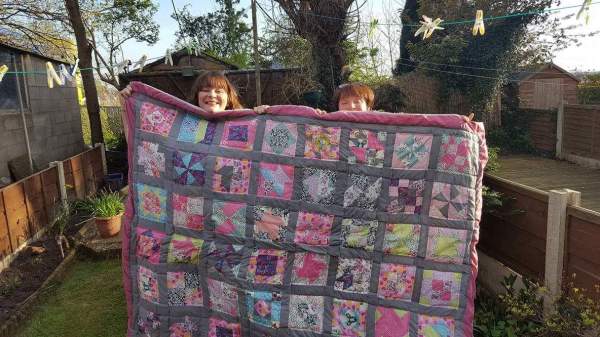 Today’s post is a real labour of love. I decided about a month a go that I would make a quilt for my Mother-in-law’s 60th birthday. I thought that it would be a great idea to give an heirloom as part of a milestone birthday like that. Let me tell you, there is a reason that I stick to dressmaking. Phew, this one was tough! It was a little beyond my (and my sewing machine’s)  talents and much more time consuming than I realised but it’s done  and I hope I’m not shaming the Quilting world!

I started off with some templates from Art of Quilting Magazine.  I started to get this when I thought that Quilting was going to be my thing and then realised it wasn’t so I don’t have the full collection but I have quite a few of them. So I took the 2 folders of patterns I did have and got to work cutting and creating. I worked through, cutting 2 or 3 of each block. I used 2 packs of fat quarters in pinks and greens and a couple of spare cotton pieces, including this Liberty Tana Lawn in Green called Oriental Floral Green. I also wanted to point out this one I bought called Utopia Dreamlandia Illuminated which is just brilliant! It took a whole weekend but I felt prepared. 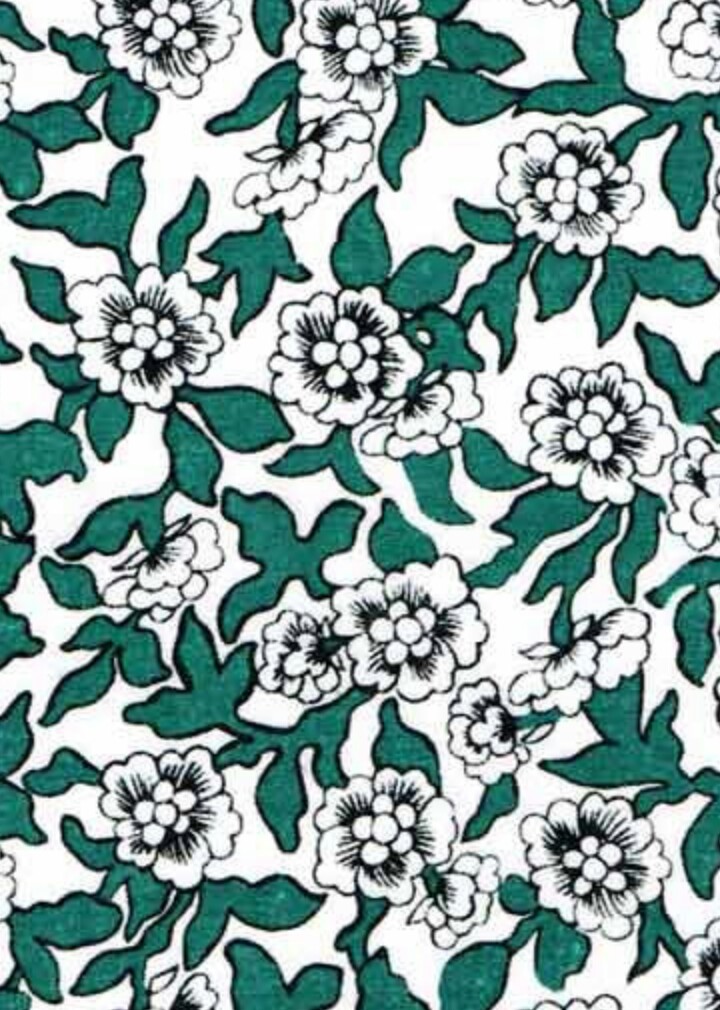 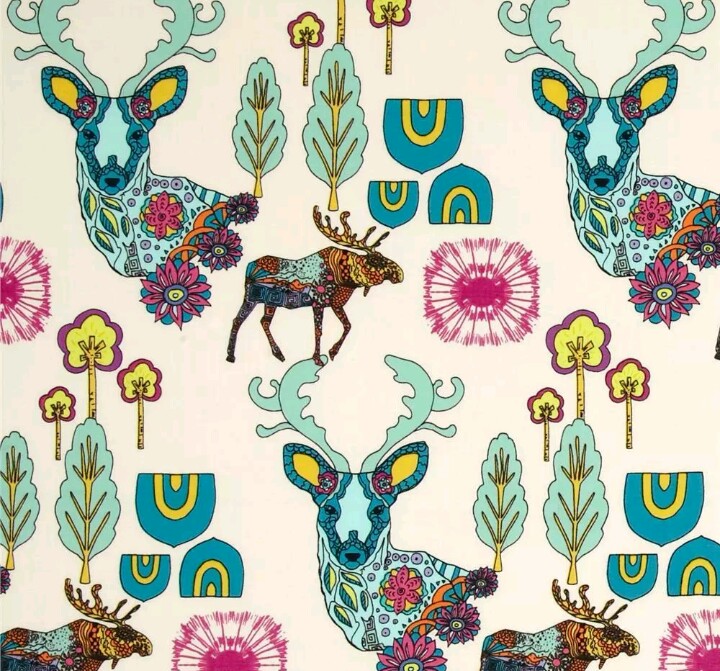 I then dutifully sewed them all together, using as much chain stitch as I could, but this confused me sometimes and I ended up with a few back to front pieces. Anyone who usually follows me will know that precise isn’t always my strong suit so some blocks aren’t perfect but as my husband continued to remind me, I was just being critical because it’s me who was making it. 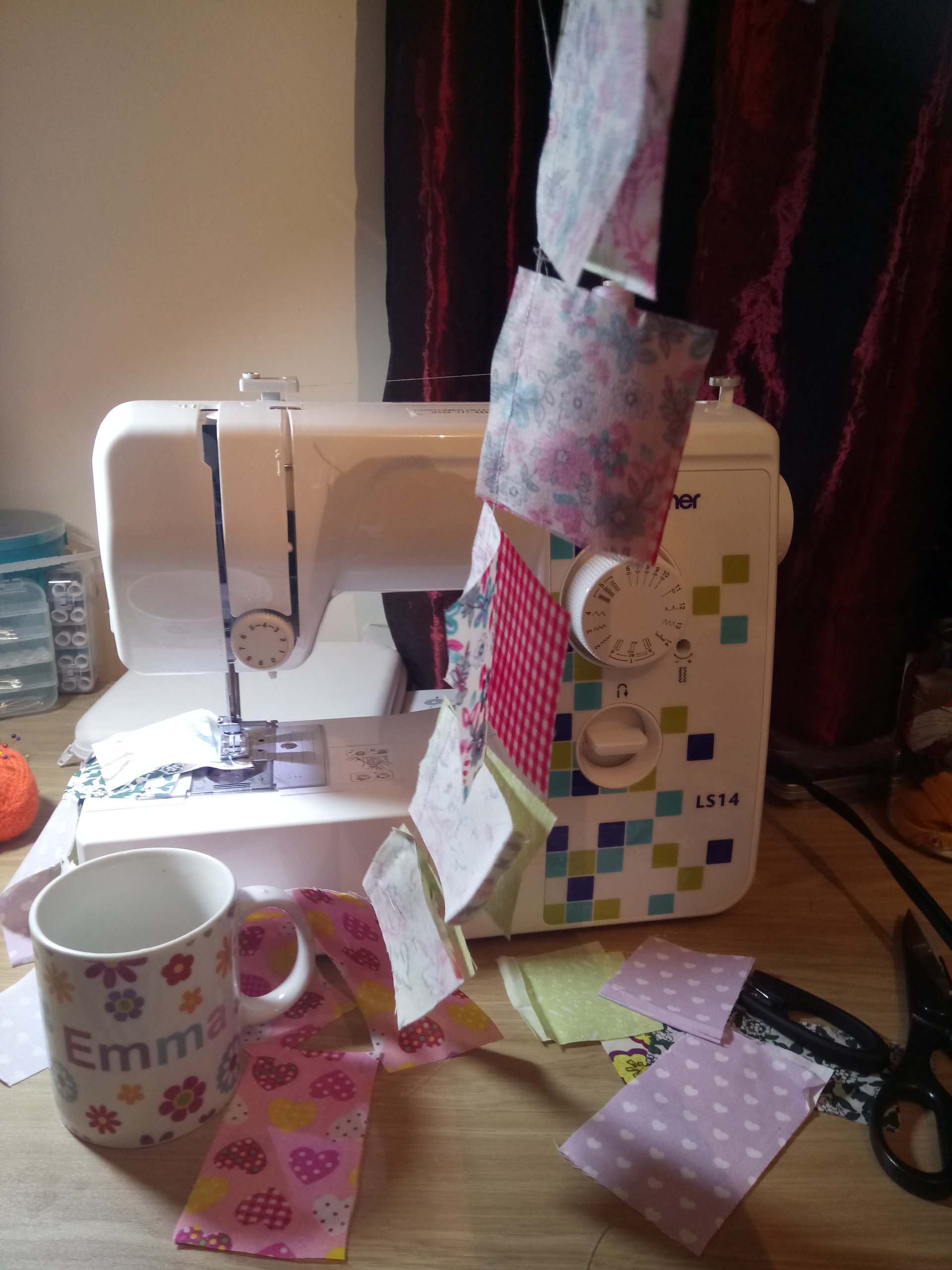 The Quilting magazine kind of haunts me as I don’t have to full set, it’s quite nice and has lots of articles on the history and mini projects but I couldn’t justify paying for it when I wasn’t enjoying it as much as dressmaking. It tells you all about the names of the blocks though, which I love; let me point out a few favourites of mine.

I pressed, snipped and created the posts in a contrast grey. I then placed it out BIG on the living room floor to decide on placement. I labelled it up and sewed them all together in lines, there was a few wonky moments but all in all it looked good. 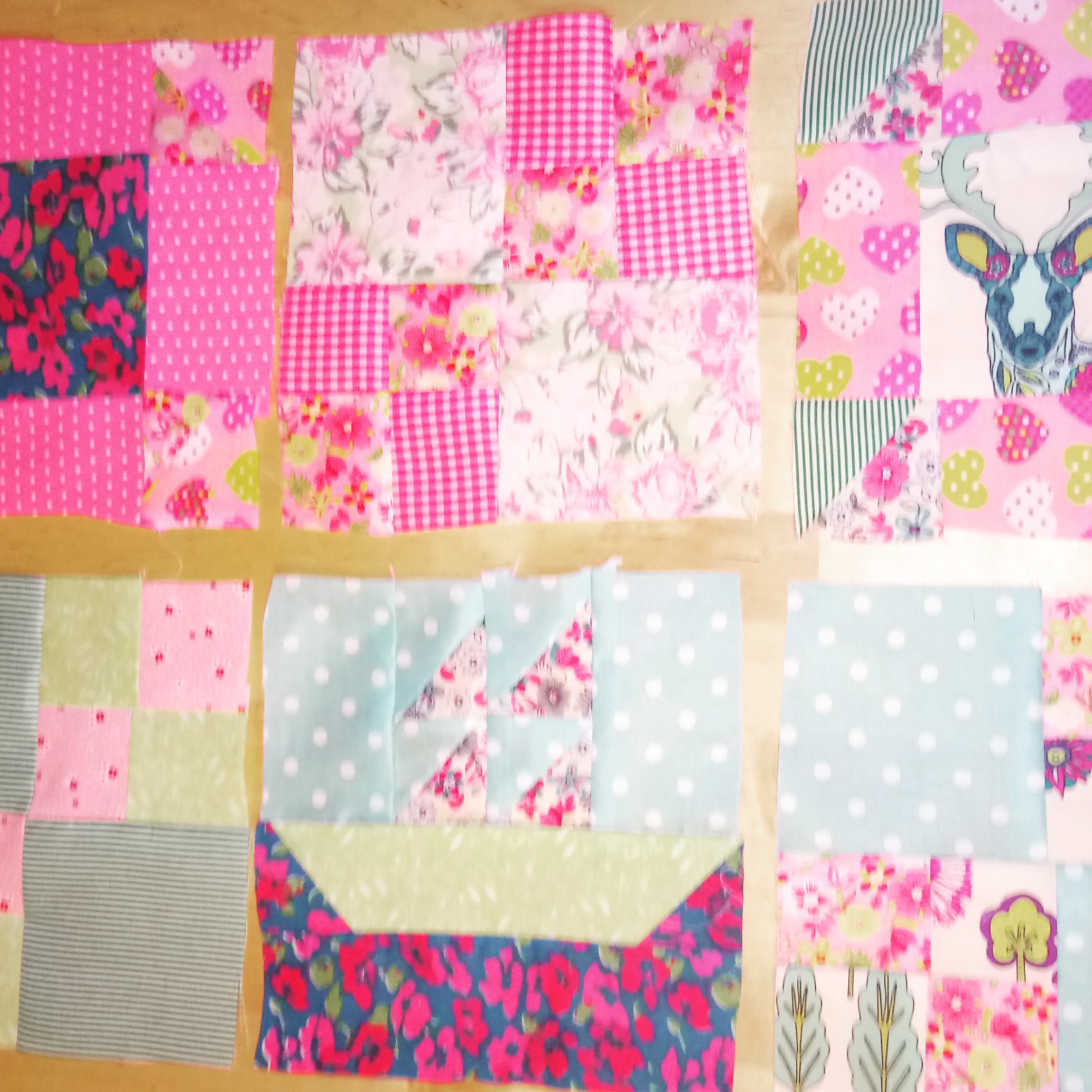 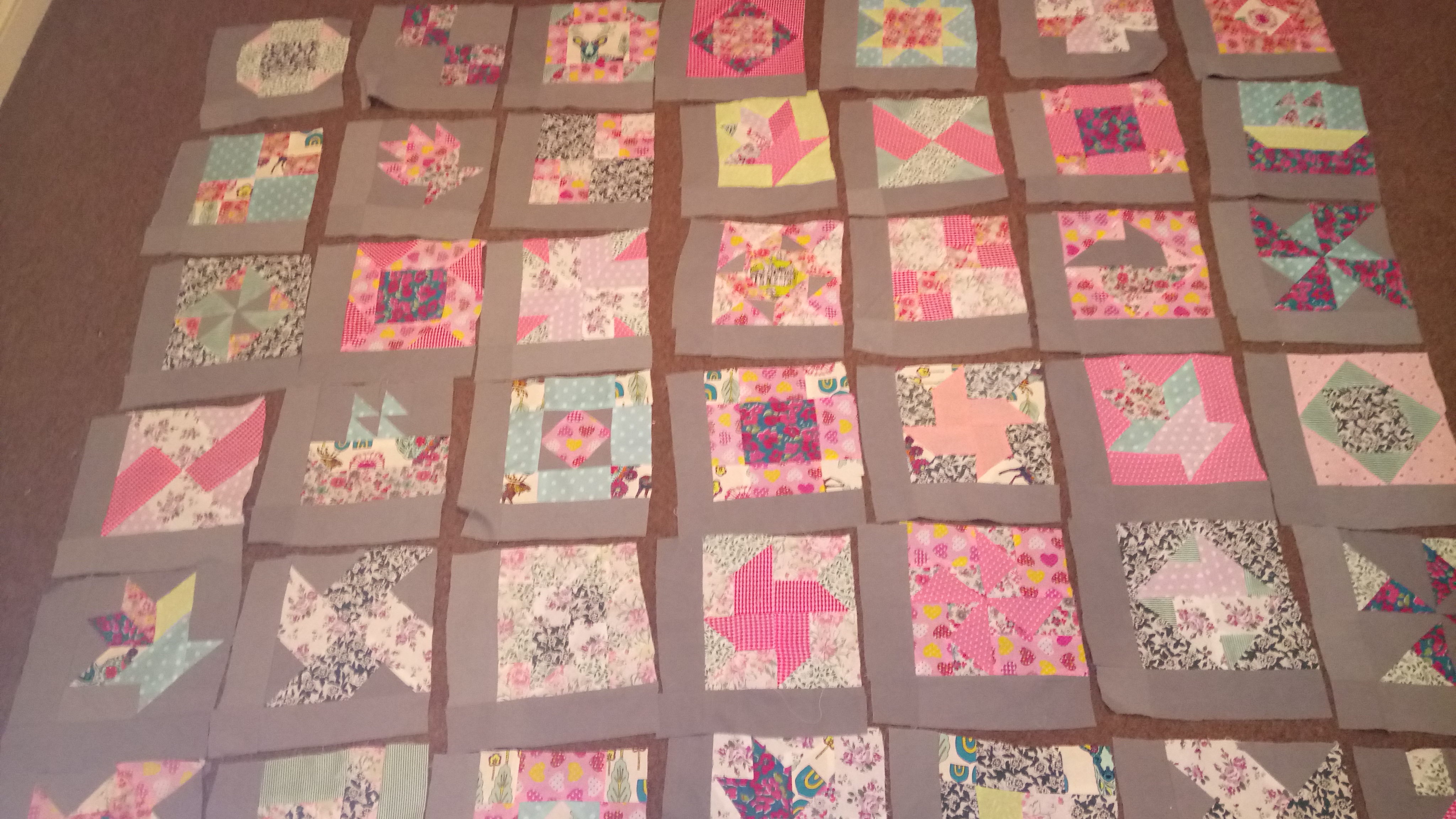 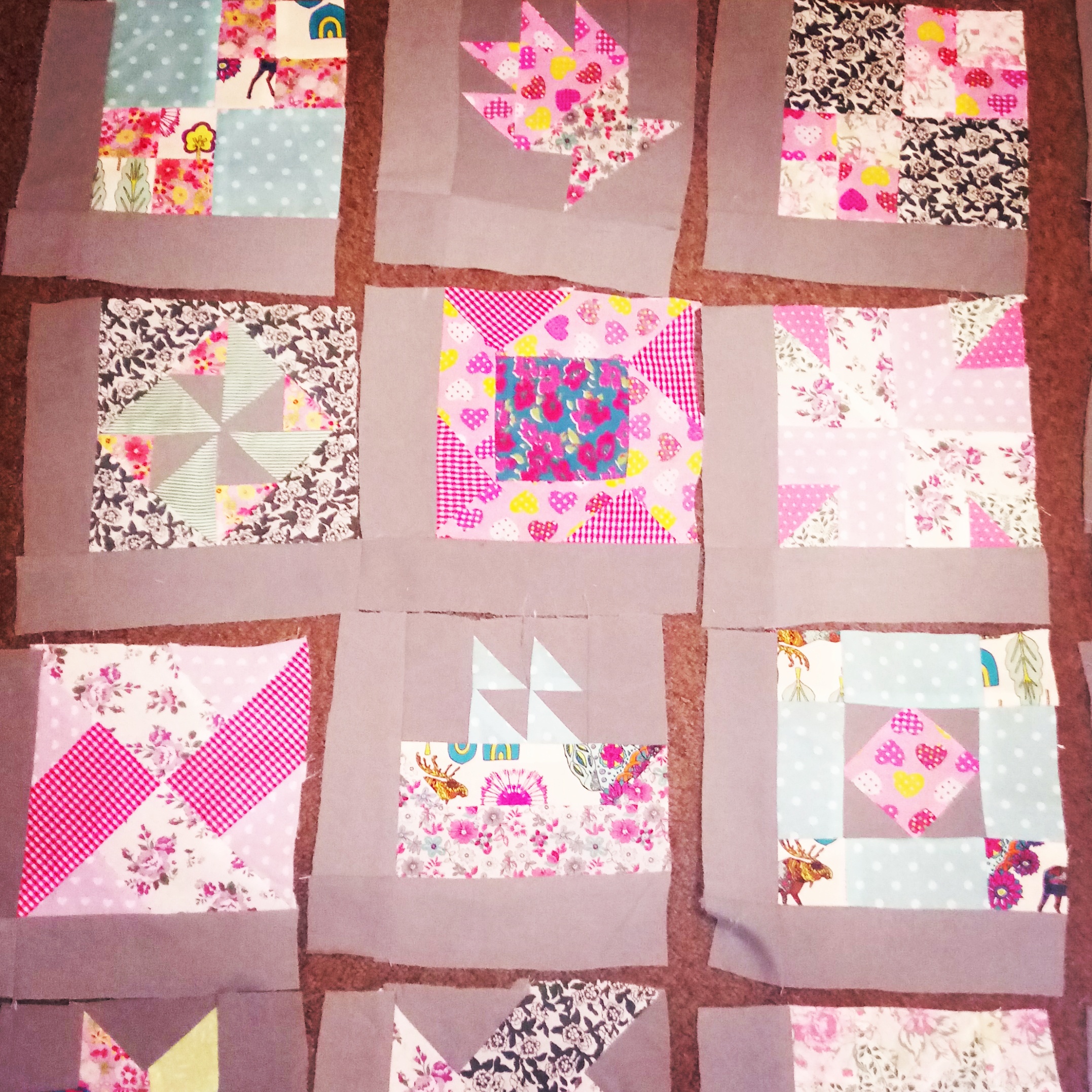 Now the tricky bit; the backing! I pressed and laid everything out, I used every safety pin I had to secure everything. I took it to my machine and it was soooo difficult! It was really heavy to deal with, it was sometimes catching and folding at the back, it was too big to go through my machine. I started to unpick some parts and do them again before realising I would literally do this forever. My machine handled it beautifully and I am quite literally proud of it, but it isn’t really big enough for all that quilt so my arms were aching so much from pushing all the quilt up and through!!  I had a MAJOR tantrum, where I dragged said quilt infront of my husband and sank to the floor saying it wasn’t going to get done and she would have to have another present. He immediately started Googling gifts (rude) and mentioned something about a Yankee candle and this brought me out of my paddy somewhat and I returned with new determination.

In the end I just went with it, it did bunch up a little in places at the back but once it was all done, it seemed to look OK. I just stuck to working round the squares and it worked out fine. I then did the binding. I machine sewed it to the front and then to avoid anything else going wrong I decided to handstitch it together… The day before. It began as a rather relaxing process and finished as a manic race to the finish. Last thing that night on went the label and Phew, she was done. 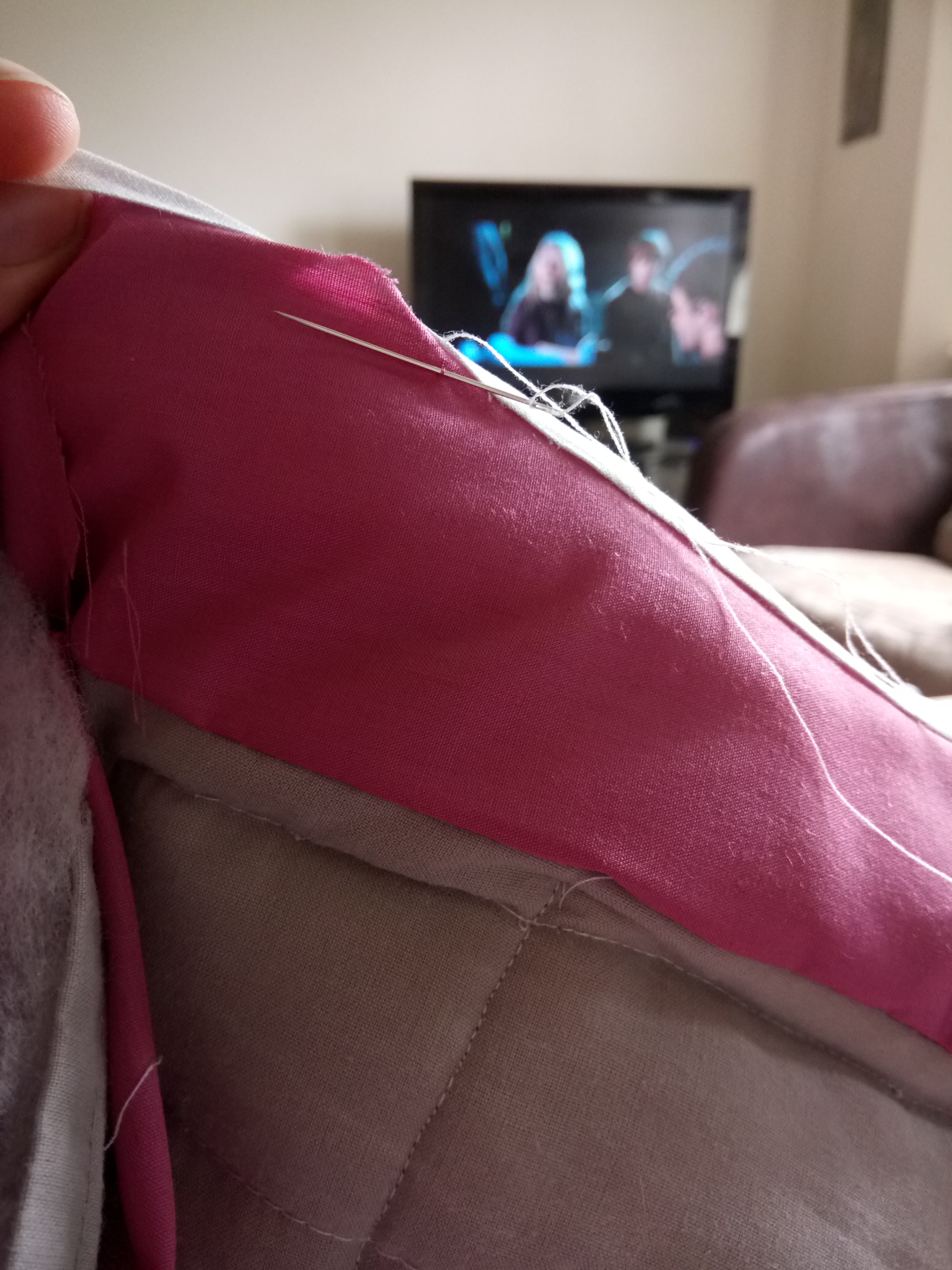 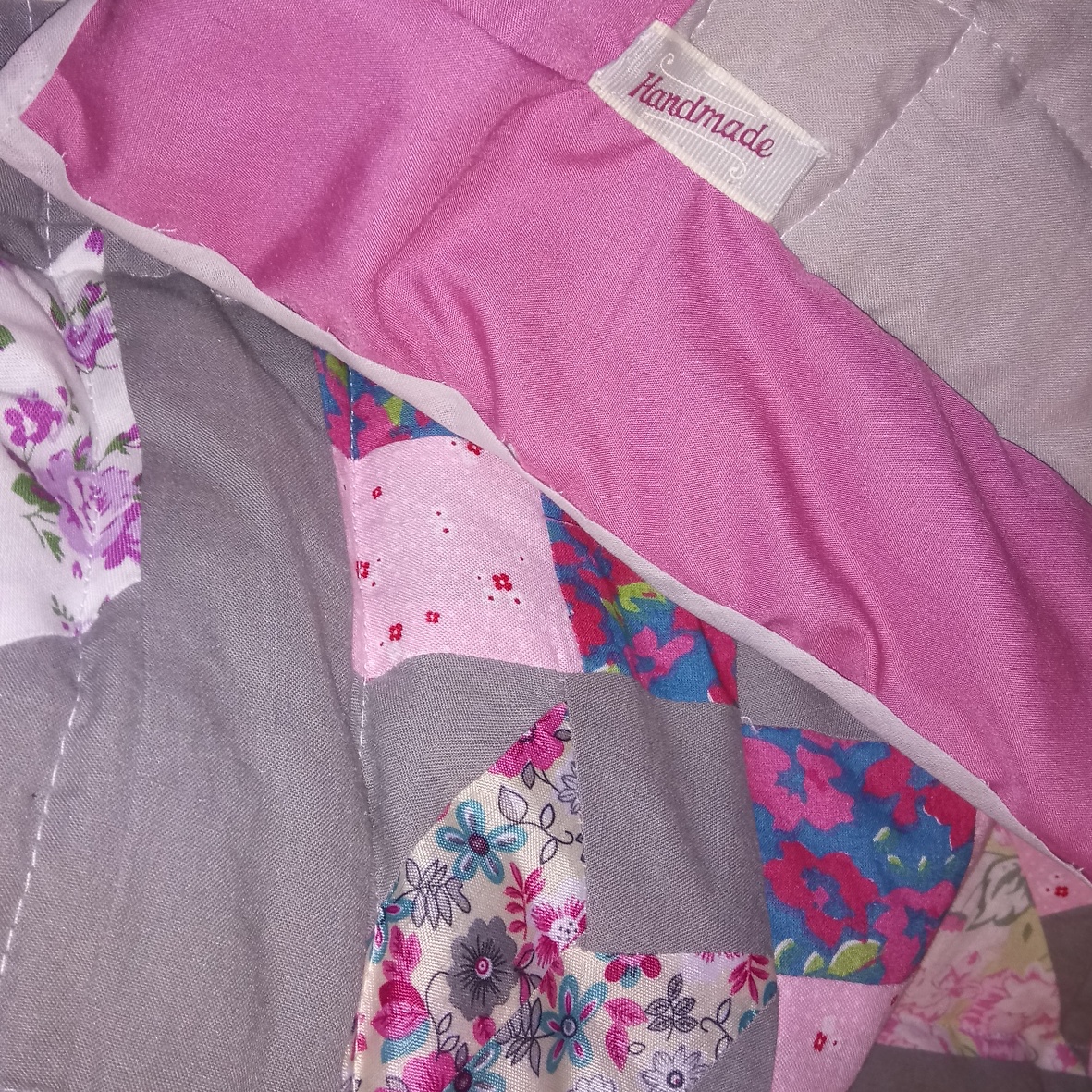 It’s a little wonky, not quite perfect and I’m not even trying to compare it to all the amazing Quilts I see on instagram but I still think it’s lovely and I’m rather proud to give it to her as a gift made with lots of love (and swearing) She was absolutely made up! I was so glad to give her something that was so heartfelt and that I had worked so hard on, and, of course, no one pointed out any wonky bits! She’s great to me and we’ll worth it.

We tried to take some pictures of the full quilt in the garden and ended up not really being tall enough!! I hope everyone has a lovely Easter weekend x 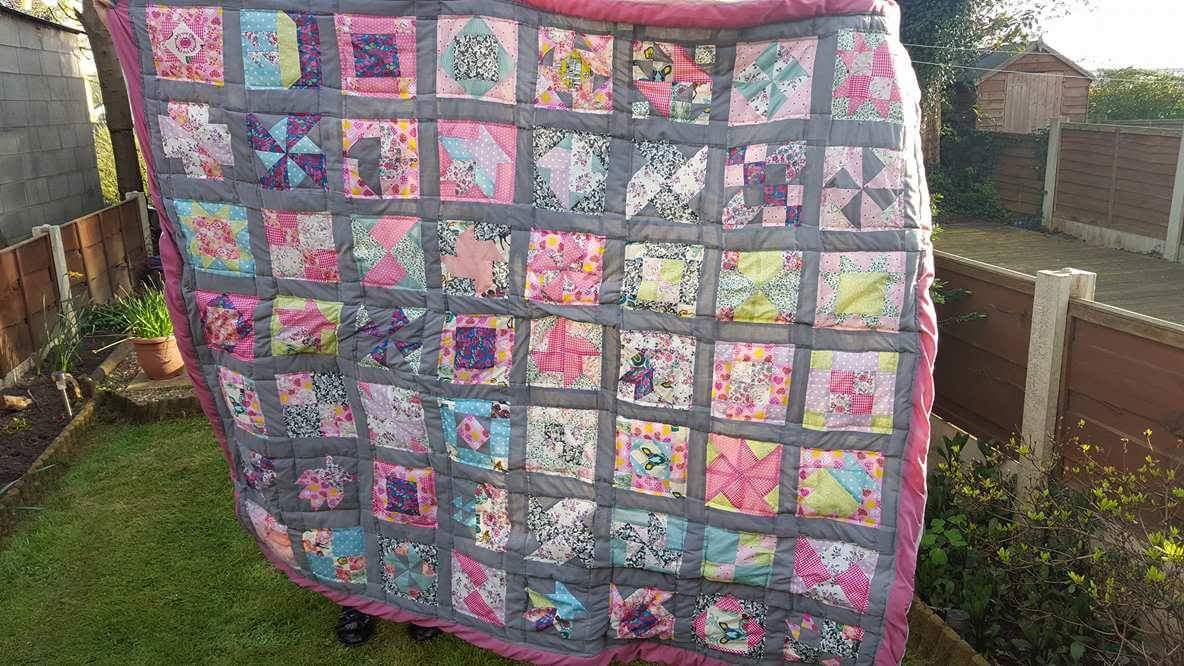 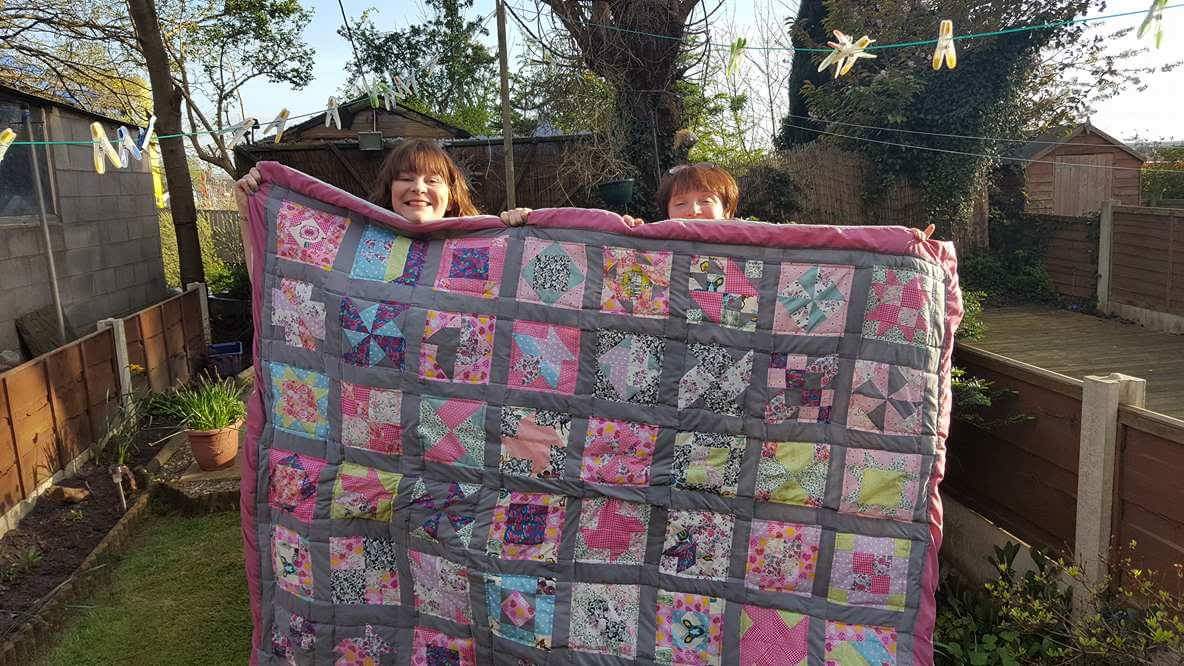 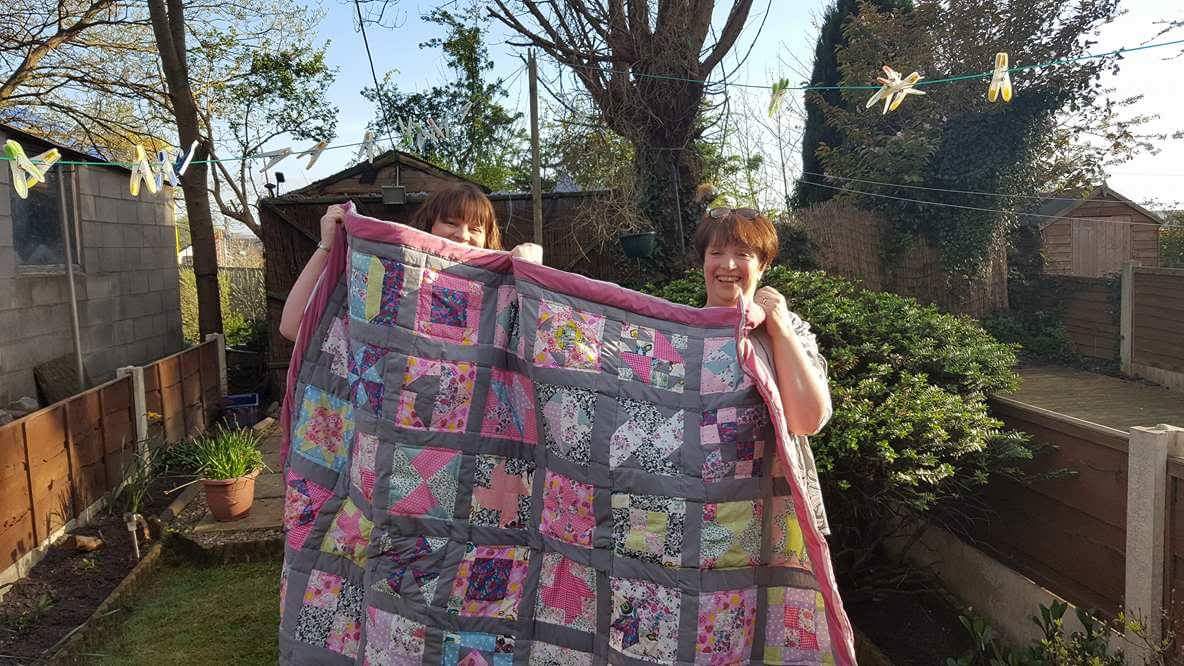 a sewing blog with a nonsense title